Introduction
Over the years Riverwatch has documented riverbank erosion using photography which now includes GPS.
While embedded GPS was not available in early 2000 photographs, photographic software has allowed the storage of GPS if other devices were used to record the GPS.

When cameras equipped with GPS came onto the market, Riverwatch purchased a Nikon camera to document many aspects of our work.  Photos have been stored on the Nikon Image Space website and some of the links below will open up selected photos in a map display with photos displayed on the side.  Different photo display options are available to choose from.  Please feel free to view and download photographs for your various requirements. 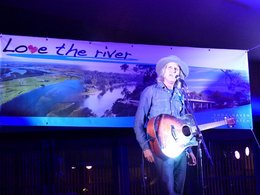 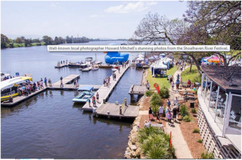 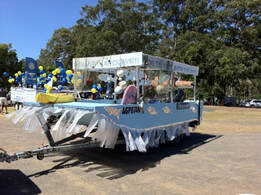 2013
2013 was the first of the Spring Festivals that organised the celebrations along the banks of the Shoalhaven River.
In following years the name was changed to the Shoalhaven River Festival.
Riverwatch was fortunate to win the best boat float during the Festival.
See the photos at 2013 Spring Festival.
Severe Riverbank Erosion at Bolong, NSW
Bank erosion along the north bank of the Shoalhaven River is serious with the loss of valuable farmland and the possible loss of the main road between Nowra and Shoalhaven Heads. (see the Current Issues article).
In February 2013 a series of photos were taken to document the bank erosion and are available at Bolong Survey 2013.
During the flood of 2013, the water level at Bolong came close to the top of the bank. See Flood Photo.
More flood photos of the Shoalhaven during this flood event is available on the South Coast Register's website.
Bolong Fishing Platform
​Funding from Shoalhaven Council and the NSW Recreational Fishing Fund enabled the construction of a new fishing platform and bank restoration work along the Council's Reserve. See Fishing Platform photos.
River Survey 2011- Nowra Bridge to Berry's Canal
In March 2011 the lower section of the river was photographically surveyed.   The photos are available in two groups as follows:
Nowra to Berry's Canal (1-200)
Nowra to Berry's Canal (201-330)
River Survey 2009 - Nowra Bridge to Burrier
In December 2009 a new photo survey was undertaken using the Nikon camera.  The GPS coordinates with this camera is approximately +- 10 metres or better when good reception is received from the satellites.
This survey focused between the Nowra Bridge and Burrier and the Nikon Image Space folders were separated into a north and south banks as follows:
North Bank
South Bank

A few photographic comparisons were made between the two groups of photos.  Note that 2009 was near the end of nearly an 8 year drought and the photos show the impact of the drought.
Comparisions.
Riverbank Survey 2002
This study was undertaken as part of the Patterson & Britton study (see our River Studies webpage ).
GPS was recorded on a portable GPS receiver and a photo was taken of the GPS co-ordinates which were later added to the photo's metadata.
The photo were grouped into different sections of the River and each group is linked to photos on the Nikon Image Space as follows:
Examples of River Bank Erosion.
Nowra to Comerong Island
Nowra to Burrier (Photos 175-375)
Nowra to Burrier (Photos 376-493)