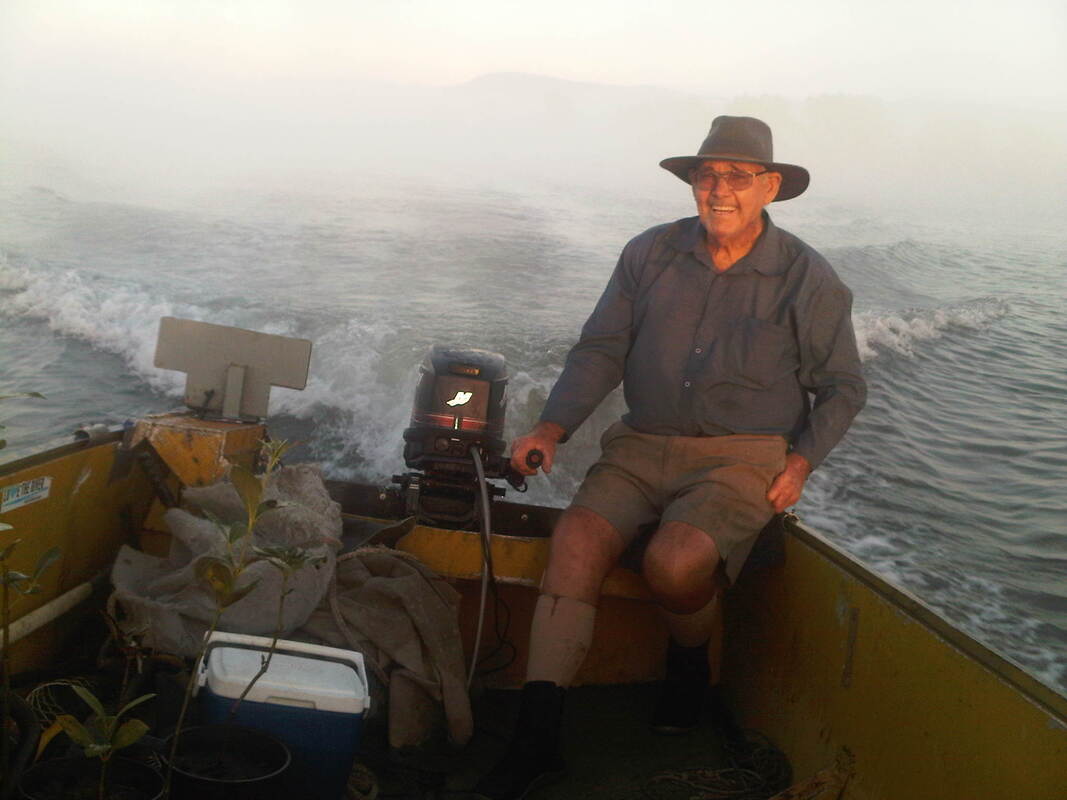 The Legacy of Charlie Weir
Charlie had a deep love of the Shoalhaven River, having grown up at Riversdale and fished the river throughout his working life. During this time, he witnessed the deterioration of the river, so in his retirement, he worked tirelessly to restore the river to good health.

Charlie was a founder of Shoalhaven Riverwatch in the early 1980’s and was a passionate advocate for the next 40 years.

Charlie was a thorn in the side of many politicians and bureaucrats, fighting numerous battles to protect the river. Some of the things he championed were:

In October 1997, Charlie responded to an ad placed in the local paper by Alan Lugg of NSW Fisheries asking for volunteers to come and plant mangroves. Charlie went that day and so began his “retirement”. From that point on Charlie was devoted to the planting of mangroves on the river. It wasn’t just the seven day a week, sun-up to sundown time spent on the river, it was very much his application to understanding what was required for the successful planting of mangroves.

Charlie worked with and inspired people and groups including school groups, LEAP programs, Green Army workers, Work for the Dole participants and anyone who would help him plant trees! He is responsible for the planting of:

As Charlie started to slow down six or seven years ago (he was now in his mid 80s) he became concerned about the future of Riverwatch and reached out for help. That began a rejuvenation of Riverwatch with the injection of some new energy and direction. The membership of Riverwatch during this time has blossomed and working bees became regular and well attended.

At our last working be in March this year, Charlie came along at the age of 92.  We were able to take him and school friend Peter Hanson senior, up the river to look over his legacy – the mangroves he loved! Also that day, one of the new brigade, Peter Jirgens, who is proudly this years’ Shoalhaven Citizen of the Year and was showing off his medallion. When he handed the medallion to Charlie, the response was “Yeah, I think I have got one of those.”

Charlie earned and deserved every public recognition that come his way, and some of these were significant awards including:

Charlie will be greatly missed, however his incredible legacy lives on. What we have today on the Southern bank of the Shoalhaven River from Numbaa Island through to Pig Island is a mangrove forest which we hope one day will be formally named “Charlie’s Forest”. If you are travelling east along Bolong Road in the vicinity of the fishing platform just before Broughton Creek, then take the time to notice the forest on the other side of the river. These trees have all been planted over the last 25 years.